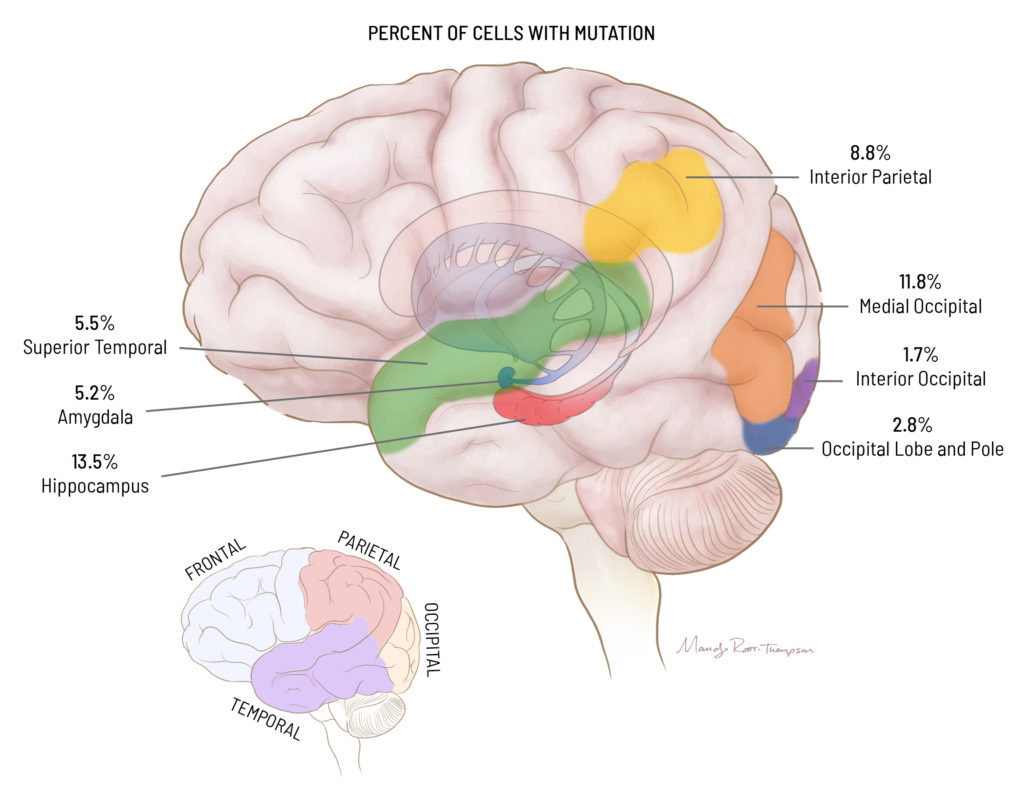 DNA replication errors during development are revealed by genomic study.

As part of an ongoing, collaborative study between neurologists and genomics experts at Nationwide Children’s Hospital, researchers have identified somatic mosaicism in the resected brain tissues of a child with treatment-resistant, intractable epilepsy. One of the two genetically distinct cell populations identified carries a pathogenic genetic variant that correlates with the severity of extracranial electroencephalography (EEG) abnormalities.

The case report is published in Neurology Genetics.

“We know that DNA replication is never perfect and mistakes happen. We postulate that during in utero development of this child, the genetic variant occurred and led to aberrant development in specific brain tissues, causing improper neuronal structure, and ultimately the epilepsy seizure phenotype,” says Elaine Mardis, PhD, co-executive director of the Steve and Cindy Rasmussen Institute for Genomic Medicine at Nationwide Children’s and co-author of the publication.

The patient, a 3-year-old male with West syndrome and intractable seizures, underwent multiple EEG studies and a single intracranial EEG to quantify neuronal activity. The latter procedure was a critical component of a two-stage epilepsy surgery to allow localization of epileptogenic brain regions for resection, a potentially curative surgical procedure to remove the disruptive brain tissue.

“This is a new way to look at a very common problem,” says Adam Ostendorf, MD, medical director of Epilepsy Surgery at Nationwide Children’s and senior author of the publication. “The partnership between our Epilepsy Surgery Program and Institute for Genomic Medicine has been incredibly fruitful, and patients and families are excited to enroll due to the potential to learn more about their child’s disease and epilepsy as a whole.”

Twelve tissues from different resected brain regions were used for DNA and RNA extraction for study by next-generation sequencing. For each tissue, the activity measured during the EEGs was correlated with the variant allele fraction, a measure that reflects the percentage of cells carrying a particular genetic variant.

“We got a number of brain tissues from the first case and started sequencing, and it worked the way it should,” says Dan Koboldt, MS, principal investigator at the Institute and study co-author. “We found a variant that is clearly disease causing and had a range of [allele] frequencies among the affected tissues. It’s exciting to see this in practice. We’re applying stateof-the-art genomics to what’s already state-of-the-art surgical epilepsy care.”

The novel pathogenic variant, which was located in a known epilepsy gene called SLC35A2, was absent in the patient’s blood cells, indicating it was not inherited, yet it was present in a range of variant allele fractions among the aberrant brain tissues, with more copies associated with more epileptogenic neuronal activity.

Prior to surgery, the child had tested negative on a clinical genetic testing panel of known variants in epilepsy-associated genes that used blood samples as the DNA source. Therefore, this study emphasizes the need to consider other, non-inherited, causes of epilepsy when assessing a patient with seizures.

The team has continued studying additional cases, which already has led to the discovery of novel genomic variations associated with epilepsy. In addition to providing answers for parents, these studies may guide future epilepsy treatment selection and could be used as a basis for innovative epilepsy therapies.